Super Mario Bros. was first released for the Nintendo Entertainment System by Nintendo in 1985. It was the follow-up to the Mario Bros. series, and started Nintendo's flagship series, the Super Mario series. As such, it was brought to most of Nintendo's subsequent systems, either as ports or through emulation. 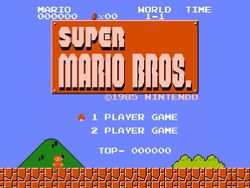 An Italian plumber named Mario, and optionally his brother Luigi, travel from Brooklyn to the Mushroom Kingdom. There, they travel across eight different worlds within the kingdom, and collect power-ups to defeat enemies standing in their way, on their quest to rescue Princess Toadstool from Bowser, King of the Koopa.

The first seven worlds have a castle where one of Bowser's minions is disguised as their king, and beating these foes will reveal their true nature. Then, upon reaching the dungeon, Mario discovers one of the many Mushroom Retainers that inhabit the Mushroom Kingdom, each of whom lets Mario know that the princess is in another castle.

Finally, upon defeating Bowser at the castle in the eighth world, Mario finally rescues Princess Toadstool. She then gives Mario the option to try a new quest, wherein she is kidnapped again, but Mario must defeat tougher enemies to rescue her.

As Nintendo's flagship title, Super Mario Bros. has been released on many different systems, both through traditional game ports and through emulation. It was released to arcades on the PlayChoice-10 system in 1985. This system allowed playing of up to ten NES-based games before the system's timer ran out.

Super Mario Bros. was included as an unlockable item in the 2001 GameCube game Animal Crossing|Animal Forest+, and its 2002 English localization, Animal Crossing. Game codes to unlock the game were given away in Japan as part of a giveaway in Famitsu magazine. It also can be unlocked in all regions with a code entered using an Action Replay device.

It was also included, along with Super Mario Bros.: The Lost Levels, and Ball, in a Game & Watch handheld video game console in 2020.

On April 19, 2019, a port was unofficially released for Commodore 64 by a programmer named ZeroPaige after seven years of work. However, on April 24, 2019, Nintendo issued a cease and desist order and contacted sites hosting it to remove the game from their servers.