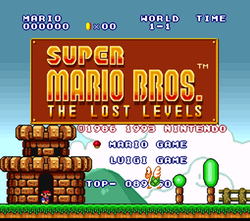 An Italian plumber named Mario, or optionally his brother Luigi, once more have to travel across the Mushroom Kingdom on a quest to rescue Princess Peach from King Koopa, who has kidnapped her again. They have to once again travel across eight different worlds within the kingdom, collecting power-ups to help them along the way, on their quest to rescue the princess.

The first seven worlds have a castle where one of King Koopa's minions is disguised as their king, and beating these foes will reveal their true nature. Then, upon reaching the dungeon, Mario discovers one of the many Mushroom people that inhabit the Mushroom Kingdom. Each Mushroom person that Mario meets tells him that the princess is in another castle.

Finally, upon defeating King Koopa at the castle at the end of the eighth world, Mario finally rescues Princess Toadstool and once again restores the fallen Mushroom Kingdom to its former glory.

Shigeru Miyamoto and his team at Nintendo R&D4 rearranged some levels from Super Mario Bros., and designed new levels, for VS. Super Mario Bros.. They did this in order to make the game more difficult for the arcade market. Miyamoto stated that the development team had so much fun making the harder levels for VS. Mario Bros. that they decided to create Super Mario Bros. 2, which would be known as Super Mario Bros.: The Lost Levels when it was released outside of Japan. 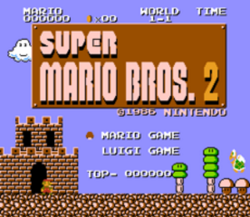 In 1998, five worlds from the Super Mario All-Stars version, with exclusive overworld maps, were included in BS Super Mario Collection for the Satellaview broadcast satellite add-on for the Super Famicom.

It was ported to the Game Boy Color in 1999, as Super Mario Bros. For Super Players, as part of Super Mario Deluxe.

It was also included, along with Super Mario Bros., and Ball, in a Game & Watch handheld video game console in 2020.