Animal Crossing, known as Animal Forest (どうぶつの森, Dōbutsu no Mori) in Japan, and as Animal Forest (动物森林, Dòngwù Sēnlín) in China, was the first game in the Animal Crossing series. It was released in Japan on Nintendo 64, worldwide on GameCube, and in China on the iQue Player . As the international versions of the GameCube version had more features than the original Japanese version, Japan later received an updated release, which had additional features of its own. This updated Japanese version was then localized and released on the iQue Player in China. 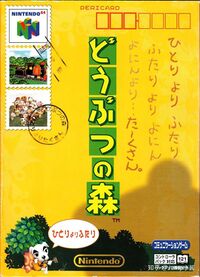 •It made use of the internal clock of the GameCube, so time passes in the game even when it is not being played.
•Nintendo e-Reader could unlock items, including Famicom games.
•Game Boy Advance link cable support allowed transportation to a new island, via a boat manned by a new villager, Kapp'n.
•Mayor Tortimer was added, giving out prizes on holidays.
•The museum was added, which allows donations of fossils, fish, bugs, and paintings.
•The Able Sisters tailor shop was added, allowing purchase and customization of clothing.
•The house now could be expanded further, to a second floor and a basement.
•There were more species of fish and bugs.

Animal Forest+ was localized by Nintendo Treehouse into English, Spanish, and French as Animal Crossing, for distribution in North America, in 2002. The name was chosen due to the "Animal Crossing" signs common on roads in North America. This release included several more additions and changes:

•The Famicom was changed to resemble an NES, and the Famicom games Mahjong and Gomoku Narabe Renju were replaced with Excitebike and Soccer.
•The bell shrine was replaced with a wishing well and the Herabuna fish was replaced with a brook trout.
•Additional holidays were added, including Graduation Day, Hometown Day, Founder's Day, Mayor's Day, Officer's Day, Sale Day and Snow Day.

Nintendo Treehouse's version was localized for more languages, and released in Europe, also as Animal Crossing, in 2004.

Animal Crossing was in turn localized in Japan, and released as Animal Forest e+ (どうぶつの森e+, Dōbutsu no Mori e+) in 2003. This version had several of its own improvements:

•After hours, Tom Nook's Shop could be visited by knocking on the door three times with the shovel, with prices inflated to 20% more than their usual value.
•Town decorations, which could be placed on sign posts, were added.
•It is no longer mandatory to ask villagers for jobs when working for Tom Nook.
•It is now possible to hear conversations held by villagers, as they no longer stop talking when they are approached.
•The island no longer needs a Game Boy Advance to access, and there are 18 new islanders.
•The e-Reader interface is now accessible at the ATM in the post office instead of at the wishing well.
•There are 16 new species of fish and bugs. In addition, 77 new villagers are present, many of which are accessed using e-Reader cards.

Animal Forest e+ was localized in China, and released as Animal Forest (动物森林, Dòngwù Sēnlín) on the iQue Player in 2006. This version doesn't have any new features, but it does have a few minor bugfixes.