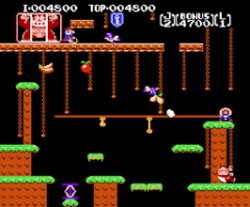 Each time he rescued Donkey Kong, Mario took him to another area, and Donkey Kong Jr. followed.

After the success of Donkey Kong, Shigeru Miyamoto designed a sequel.

The resulting game was Donkey Kong Junior, which was a worldwide success.

Donkey Kong Junior was designed by reverse-engineering the code of the original game, which was subcontracted to Ikegami Tsushinki.

In 1990, the court found that Nintendo did not own the code to Donkey Kong, resulting in Nintendo settling with Ikegami Tsushinki out-of-court for an undisclosed sum. 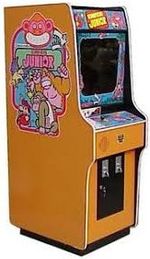 As the second game to feature Nintendo's mascot Mario, it has been released on many different systems, both through traditional game ports and through emulation. It was first released to arcades in 1982.

Coleco secured the rights to release the game to home video game consoles. Coleco published it on Atari 2600, ColecoVision and Intellivision in 1983, and on Atari 7800 in 1986.

Atari secured the rights to release the game to computers. Atari published it on Atari 8-bit computers and BBC Micro in 1983.