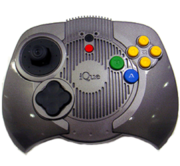 The iQue Player, known in Chinese as iQue Shén Yóu Ji (iQue 神游机, iQue divine gaming machine), was a specialized system released only in China by iQue that had support for Nintendo 64 games as well as games developed on the iQue hardware itself. It shipped with timed demos and the full Chinese version of Dr. Mario 64 built-in

It was released in China on November 17, 2003. Upon release, games had to be purchased from a specialized iQue Player depot, known in Chinese as Shén Yóu Jiā Yóu Zhàn (神游加油站, divine gas station), wherein purchased games would be downloaded and unlocked in the system's memory. In 2009, with the release of a Windows program titled iQue@Home, known in China as Shén Yóu Zài Xiàn (神游在线, divine online), games could be downloaded through a Windows computer via a USB cable.

China banned video game consoles in 2000, due to concerns over adverse effects in youth. As a result, in 2002, iQue was founded as a joint venture between Chinese-American scientist Wei Yen and Nintendo. The iQue Player was developed to circumvent the ban, as it did not have the physical media of traditional consoles, and games were stored in system memory.