Donkey Kong 3, was first released for the arcade. It was developed by Nintendo Research & Development 1 and was published by Nintendo in 1983. It was the third game in the Donkey Kong series, and the first game in the series that did not include Nintendo's mascot Mario. 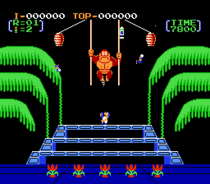 Donkey Kong and bugs are invading a garden.

Stanley the bugman must use his bug spray to spray the bugs away from the plants.

He also has to spray donkey kong until he climbs vines out of the garden.

He has to keep at least one vegetable in the garden or else he fails his mansion.

Eventually, Stanley manages to rid the garden of Donkey Kong and Stanley moves to the next part of the garden.

Unfortunately, Donkey Kong and the bugs follow him and he has to start spraying again.

After the success of Donkey Kong and Donkey Kong Junior, Shigeru Miyamoto designed a sequel.

The resulting game was Donkey Kong 3, which did not reach the success of the previous games in the series.

As the third game in the popular Donkey Kong series, it has been released on many different systems, both through traditional game ports and through emulation. It was first released to arcades in 1983.

The Nintendo subsidiary iQue released Animal Crossing for the iQue Player in 2006. This version included Donkey Kong 3 as well.

It was released on Virtual Console for Wii in 2008 in North America and in 2009 in Europe.