The Nintendo 3DS, the seventh, and current, handheld video game console released by Nintendo, was first released in 2011.

It is backward compatible with most Nintendo DS and Nintendo DSi games. 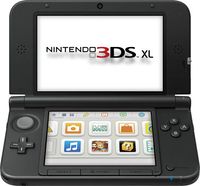 The New Nintendo 2DS contains the same hardware as the Nintendo 3DS, except it doesn't include the stereoscopic 3D display. Unlike the original Nintendo 3DS and the Nintendo 3DS XL, the Nintendo 2DS features a slate form factor rather than the clamshell design as the other systems in the line. It was released in North America, Europe, and Oceania on October 12, 2013, in South Korea on December 7, 2013, and in Japan on February 27, 2016.