Nekketsu Renegade Kunio-kun (熱血硬派くにおくん, Nekketsu Kōha Kunio-kun) was originally released outside of Japan as Renegade. It was originally released for the arcade market in Japan in 1986. It was published in North America later that year by Taito as Renegade, using the film The Warriors as inspiration for the revised art and storyline. Most sprites and backgrounds were modified to better appeal to the North American market. The voice samples were also changed to English, however, the music was left unaltered. It is the first game in the Kunio-kun series. 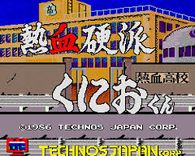 In the Japanese version, Nekketsu Renegade Kunio-kun, Kunio is a high school student at Nekketsu, which literally translated into English means hot-blooded. His best friend, Hiroshi, is attacked by several street gangs, and Kunio fights to avenge him.

The fights are each against different stereotypical gangs in Japan. The first fight is at a train station against a rival high school, Hanazono, which literally translated into English means flower garden. The second fight is at a seaport against a bōsōzoku gang, a youth culture in Japan that is into customized motorcycles, named Yokohama Funky. The third fight is against girls from Taiyō Academy and their sukeban, or boss girl. The final fight is at a car dealership that is a front for the Yakuza crime organization known as the Sanwakai. After defeating Sanwakai's leader, Sabu, the students of Nekketsu cheer for Kunio's victory. In the Famicom version, after his defeat, Sabu kidnaps Hiroshi and Kunio has to traverse a building full of mazes of doors to reach Sabu and save his friend. 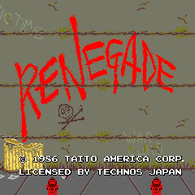 In the original North American version, Renegade, Mr. K is a renegade vigilante that fights numerous street gangs in order to save his girlfriend.

The street gangs that Mr. K defeats are comprised of different stereotypical gangs in North America. The first fight is at a subway station, and the fight is against stereotypical urban gangs, rather than the high school students of Nekketsu Renegade Kunio. The second fight takes place at a seaport against stereotypical biker gang members, thugs, and masked wrestlers, rather than against juvenile bikers. The third fight is against women fighters, although they too appear to be older, as they wear slacks and tank tops rather than high school uniforms. The final fight is largely unchanged, as it still takes place in a car dealership that is actually a front for gangsters, and the boss is still Sabu. The only difference is that some gangsters have darker skin tones. The Nintendo Entertainment System version also has the extra stage with the building full of mazes of doors, however Sabu kidnaps Mr. K's girlfriend rather than Hiroshi. 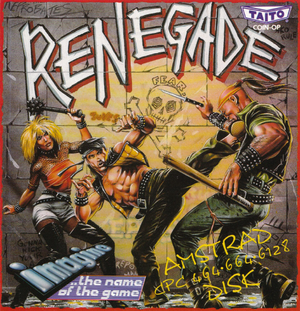 Hamster released an emulated version of the arcade version for Nintendo Switch, as part of their Arcade Archives line, in 2018. This release included both the North American and the untranslated Japanese version.

The Famicom version of Nekketsu Renegade Kunio-kun and the NES version of Renegade was included in the Kunio-kun World Classics Collection in Japan for PlayStation 4, Switch, and Xbox One in 2018. The collection was released as Double Dragon & Kunio-kun Retro Brawler Bundle worldwide in 2020. This also included the NES and Famicom versions. The latter was fully translated, which marked the first time this version was released outside of Japan.