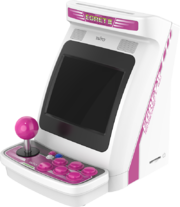 EGRET II Mini is a miniature video game system by Taito. It was conceived after the success of the similar Neo Geo Mini and Astro City Mini consoles by SNK and Sega Toys, respectively.

It was released in Japan by Taito on March 2, 2022. It was published worldwide by ININ Games and Strictly Limited Games on June 3, 2022.

It contains forty built-in games running on an emulator. It is designed to resemble the Taito EGRET II arcade cabinet, which was first released in 1996. It contains an arcade stick with microswitches and six buttons, as well as a start and a select button. It has two USB-A connections for external controllers. Games can be played on the small included screen, or via HDMI out on a television screen. Power is supplied via a micro USB connection.

Forty games are included in the EGRET II Mini.

Ten games are included on an SD card in the Paddle & Trackball Games Expansion Set.