Super Mario Bros. Special (スーパーマリオブラザーズ スペシャル) was developed by Hudson Soft, under license from Nintendo. It is a version of Super Mario Bros. for Japanese computer systems. It contains some new levels, as well as returning enemies and power-ups from Donkey Kong and Mario Bros. 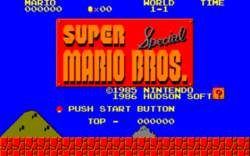 The first seven worlds have a castle where one of King Koopa's minions is disguised as their king, and beating these foes will reveal their true nature. Then, upon reaching the dungeon, Mario discovers one of the many mushroom retainers that inhabit the Mushroom Kingdom. Each mushroom retainer tells Mario that the princess is in another castle. Finally, upon defeating King Koopa at the castle at the end of the eighth world, Mario finally rescues Princess Peach and once again restores the fallen Mushroom Kingdom to its former glory.

Hudson Soft attempted to create the look of Super Mario Bros. as best they could, however, as the computers of the time did not have the requisite hardware to replicate the game accurately, the game has a few differences from its inspiration. A minor difference is the different color palette. Another difference is that only Mario is available, and there is no support for multiple players. The major difference is the lack of smooth horizontal scrolling. Instead, the game contains single screens, which change to the next screen upon reaching the end of the first. This makes the game much harder, as it is often difficult to make accurate jumps. Additionally, shells can bounce off of an object and come back to hit Mario, even if that object is on another screen. 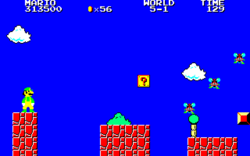 Super Mario Special has power-ups and items that are not seen in any other game in the Super Mario series. Some of these come from earlier games, such as Donkey Kong and Mario Bros, whereas others are unique to this game. 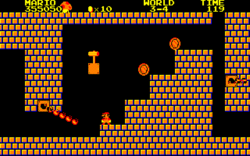