VS. Super Mario Bros. was a game in the Super Mario series. It contains mostly the same story and many of the same levels as Super Mario Bros., but it is not the same game. It was first released in arcades on the VS. System by Nintendo in 1986. It was later published for the Nintendo Switch by Hamster, as part of their Arcade Archives series, in 2017. 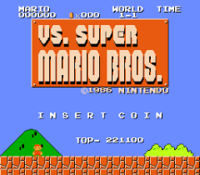 An Italian plumber named Mario, and optionally his brother Luigi, travel from Brooklyn to the Mushroom Kingdom. There, they travel across eight different worlds within the kingdom, and collect power-ups to defeat enemies standing in their way, on their quest to rescue Princess Toadstool from King Koopa.

The first seven worlds have a castle where one of King Koopa's minions is disguised as their king, and beating these foes will reveal their true nature. Then, upon reaching the dungeon, Mario discovers one of the many Toads that inhabit the Mushroom Kingdom, who lets Mario know that the princess is in another castle.

Finally, upon defeating King Koopa in the castle at the end of the eighth world, Mario finally rescues Princess Toadstool, and the fallen Mushroom Kingdom is restored to its former glory.

Shigeru Miyamoto and his team at Nintendo R&D4 rearranged some levels from Super Mario Bros., and designed new levels, in order to make the game more difficult for the arcade market. Miyamoto stated that the development team had so much fun making the harder levels for VS. Mario Bros. that they decided to create Super Mario Bros.: The Lost Levels, the game that was originally known as Super Mario Bros. 2 in Japan. 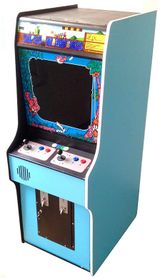 As it is an arcade game, various operator settings can be set in order to make the game harder. The player may now start with two lives instead of three. In addition, it is possible to set the timer to run faster than in Super Mario Bros.. The coin counter now has three digits instead of two, since it is now possible to set the extra life counter to more than 100 coins. This counter can be set to 100, 150, 200, or 250 by the operator. Also, after a game over, depending on operator settings, the player may continue with either three or four lives. 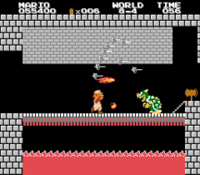 There are also new levels introduced in this game. The new levels are 1-4, 3-2, 6-3, 6-4, 7-2, and 7-3. These levels were later used in Super Mario Bros.: The Lost Levels, which was originally known outside of Japan as Super Mario Bros. 2, albeit in a different order. 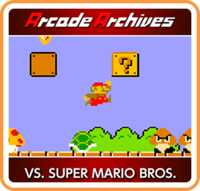 VS. Super Mario Bros was first released to home consoles, on the Nintendo eShop digital distribution service, for the Nintendo Switch in 2017 as part of Hamster's Arcade Archives series.

As with all Arcade Archives games, it is an emulated version of the arcade game. Thus, it is identical to the original Nintendo VS. System release. As it is an emulated arcade game, it includes access to the operator switches to change the behavior of the game. It also includes support for saving the game at any point, which offers optional help for the difficulty of the game.

Additionally, there are scaling algorithms available to customize the look of the game, including a scanline filter that approximates the look of arcade monitors of the time.

Two-player games can be played by using two detached Joy-Con controllers. In addition to local competitive play, there is also optional support for sharing high scores online, which are then displayed on an online leaderboard.