Super Mario Bros. 3 was first released for the Famicom by Nintendo in 1988, and then on the international version of the Famicom, the Nintendo Entertainment System, in 1990. It was part of Nintendo's flagship series, the Super Mario series. As such, it was brought to most of Nintendo's subsequent systems, either as ports or through emulation. 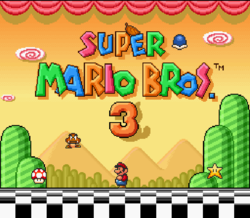 An Italian plumber named Mario, and optionally his brother Luigi, once again find themselves in the Mushroom Kingdom. There, they traveled across eight different kingdoms, and collected power-ups to defeat enemies standing in their way, on their quest to rescue Princess Toadstool from Bowser.

The first seven kingdoms had a castle that was taken over by one of Bowser's Koopalings. The Koopalings retreated to their fortified airship and awaited the arrival of one of the Mario Bros. Beating these foes caused them to drop wands. The wands were then taken back to the castle, and each of the seven kings, who had all been transformed by magic, returned to normal. The princess sent notes containing power-ups after each king was restored.

Finally, upon defeating Bowser at the castle in the eighth world, Mario finally rescued Princess Toadstool. All of the Kings were restored to their true form, Bowser and his Koopalings were forced out of all of the kingdoms, and peace was restored to the Mushroom World.

As part of Nintendo's flagship series, Super Mario Bros. 3 has been released on many different systems, both through traditional game ports and through emulation.

It was released to arcades on the PlayChoice-10 system in 1989. This system allowed playing of up to ten NES-based games before the system's timer ran out.

The game, based on the Super Mario All-Stars version, was then ported to the Game Boy Advance, and released as Super Mario Advance 4: Super Mario Bros. 3 in 2003.