Fire Truck was an arcade game developed and released by Atari in 1979. It ran on a board set with a Motorola 6800 central processing unit (CPU). 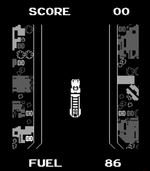 A fire truck has to drive through a town, making it as far as possible without crashing.

If the fire truck is the model named Smokey Joe, then it is simply driven by one person. However, if it is the standard variant of Fire Truck, then the truck is driven by two people cooperatively.

The goal is to rack up as many points as possible before the truck either crashes or runs out of fuel.

The Smokey Joe variant is simply a one-player game without the stand-up portion of the cabinet, so the trailer doesn't steer independently of the truck.

Both variants were released by Atari in 1978.