Super Mario World 2: Yoshi's Island, known as Super Mario: Yoshi Island in Japan, was first released for the Super Nintendo Entertainment System by Nintendo in 1995. Although it is marketed as part of the Super Mario series, it was actually a game in the Yoshi series. 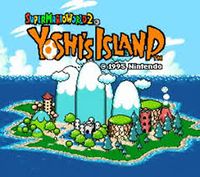 The stork that delivered Mario and his slightly younger twin brother, Luigi, came from the Mushroom Kingdom, to deliver the twins.

A powerful magikoopa named Kamek traveled back in time to when the twins were still babies, to try to prevent their constant thwarting of Bowser, King of the Koopa.

He attacked the stork that was carrying the twins, but he only managed to kidnap Luigi, while Mario fell down to Yoshi Island.

The Yoshis rescued Mario, and later rescued his brother, returning them to their parents.

Super Mario World 2: Yoshi's Island has been released on many different systems, both through traditional game ports and through emulation.

It was ported to the Game Boy Advance in 2002. An emulated version of this port was released for the Virtual Console on New Nintendo 3DS in 2011, and on the Wii U Virtual Console in 2014

Super Mario World 2: Yoshi's Island was also included as one of the 30 games in the Super Nintendo Entertainment System Classic Edition and Super Famicom Mini miniature video game consoles, which were both released in 2017.