EarthBound Beginnings was created by Shigesato Itoi, and was developed by his company, APE. It is the first game in Nintendo's EarthBound series. It was released for the Family Computer on July 27, 1989 as Mother. 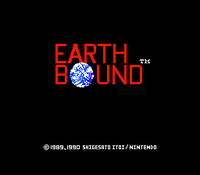 In the early 1900's, in rural America, a dark shadow clouded a small country town, and a young married couple vanished mysteriously from their home.

In 1989, a boy named Ninten notices strange things happening in his home, and sets off on a quest to try to stop whatever is causing them. Along the way, he comes to realize that an alien invasion is happening, and that his family has more involvement in this than he realized.

He travels across America, traveling to a desert, a big city, atop a mountain, and into a dream world named Magicant. Along the way, he meets new people, some of whom decide to travel with him. Eventually, Ninten and his friends discover the truth behind the disappearance of Ninten's grandparents, uncover an alien plot, and finally manage to defeat the alien Giegue.

Shigesato Itoi named the game Mother after the John Lennon's song of the same name, as the song moved him so much that he wanted other people to feel the same. Itoi related to the song, which dealt with the experience of growing up without parents, as Itoi's own father was absent for much of his life. When he made Mother, he decided that Ninten's father should be absent, as only a voice on a telephone.

Nintendo of America localized Mother for a North American release on the Nintendo Entertainment System, which was originally titled Earth Bound. However, they abruptly canceled the game's release in 1991, due to the cost involved in making a cartridge release for a game that was large in both size and scope, and due to the fact that the Super Nintendo Entertainment System was scheduled to be released in North America later that year.

The original Mother was released in Japan for the Famicom in 1989. Nintendo of America's Earth Bound localization did not get its planned 1991 release, however, the remake of Mother incorporated the changes and enhancements that the Nintendo of America translation team made in their localization. Mother and Mother 2 were both remade on the Game Boy Advance in a compilation cartridge, which was only released in Japan in 2003. This version also fine-tuned the difficulty and fixed some bugs in the final portion of the game that took place on Mt. Itoi, as these were not addressed in the original Famicom release due to time constraints.

The Earth Bound localization was digitally published by Nintendo on June 14, 2015 in North America and Europe on the Wii U through Nintendo's Virtual Console emulation service on Nintendo's eShop. Since Mother 2 was released outside of Japan as EarthBound, the game was released as Earthbound Beginnings. The title screen still used the Earth Bound logo, however.