"Doki doki" is a Japanese onomatopoeia for a beating heart. 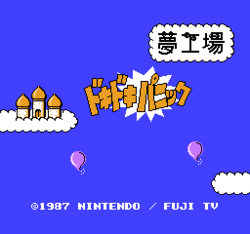 Inside of a book resides the land of Muu, where the weather is tied to dreams, and a weather machine makes sure that everyone has good dreams.

One day, an evil toad named Mamu corrupted the dream machine and made it so that it produced nightmares. However, Mamu's weakness to vegetables was discovered, and he was defeated.

One day, twins named Poki and Piki discover the book and fight over who gets it. They accidentally tear out the last page and free Mamu. He reaches out from the book, and pull them inside.

It's now up to the twin's Mama and Papa, as well as their brother Imajin and his girlfriend Lina to enter the book to rescue Poki and Piki.

They need to complete each chapter, and finally complete the final chapter and defeat Mamu once again, to restore peace to Muu and to get the twins back.

Kensuke Tanabe and the team at Nintendo R&D4 already had a Mario platforming prototype. The prototype originally had vertical scrolling gameplay and emphasized throwing blocks. Shigeru Miyamoto suggested adding horizontal scrolling gameplay as well. When the prototype was expanded into a full game it contained Mario elements, such as the POW block from Mario Bros. and the Starman from Super Mario Bros.

However, Doki Doki Panic contained characters from Dream Factory '87. The story revolves around a storybook. Twins Poki and Piki were fighting over the last page of the book, and the evil Mamu pulled them into the book. Their family has to venture into the storybook themselves to save them. The brother, Imajin, was average in all areas. Mama could jump high and float for a bit. Lina, Imajin's girlfriend, could hover, but she lacked speed and strength. Papa was the strongest and fastest, but he couldn't jump very high.

Dream Factory: Doki Doki Panic has never been released on any other platform other than the original 1987 Family Computer Disk System release.

However, since Nintendo owns all of the assets used in the conversion to Super Mario Bros. 2, this version has been brought to many different systems, both through traditional game ports and through emulation.