The Mystery of Atlantis

The Mystery of Atlantis (アトランチスの謎, Atlantis no Nazo) is a side-scrolling platforming game that was released for the Family Computer by Sunsoft on April 17, 1986. It was one of the thirty games included with the Famicom Mini, which was released on November 10, 2016. 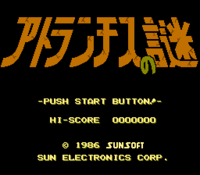 The game follows a man named Wynn, who has entered the lost city of Atlantis with his master.

The two hope to be able to find long lost treasure in the fabled lost city.

However, Wynn's master was soon kidnapped by King Zavila.

Now, Wynn ventures into the many rooms of Atlantis. However, many strange creatures will be trying to kill him.

Wynn has to save his master and collect treasure along the way. 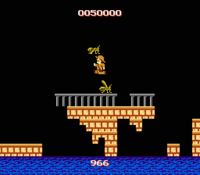 This is a platforming game that is comprised entirely of warp zones. Enemies must be avoided, as they will kill Wynn with a single hit.

Bombs are used to access warps, which brings Wynn to a different zone.

There are perilous warps which must be avoided, such as the bottomless black hole, which will eliminate all of Wynn's lives.

Once he reaches the Final Zone, Wynn must avoid the evil King Zavila, who is holding his master captive.

Wynn must avoid the fireballs that Zavila throws at him, and ultimately save his master. 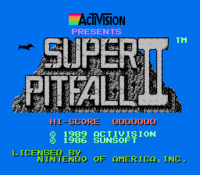 Activision localized this game as Super Pitfall II (although it is unrelated to Super Pitfall), and intended to release it for the Nintendo Entertainment System in 1989. The localization was completed, but it was cancelled for an unknown reason.

The localization keeps much of the game the same. The major changes include the title screen, grammar corrections, and a change to make the black hole lead to one life left rather than instant death. 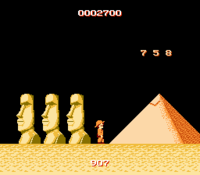 There is one major change in a puzzle that requires knowledge of Japanese. The screenshot on the right is the puzzle in Super Pitfall II. The solution is to stand on top of the first Moai head, and throw seven bombs, then stand on the second and throw five bombs, and then stand on the third and throw eight bombs. In Atlantis no Nazo, the clue is much harder. The clue is Nagoya, which requires knowledge of goroawase, a form of wordplay where a series of numbers matches up to the syllables in a word. In this case, na, go, and ya would equal 758. The localization simply gave the numbers for the puzzle as the clue.

A prototype cartridge of Super Pitfall II, containing what appears to be the complete North American localization of Atlantis no Nazo, was discovered in 2009.