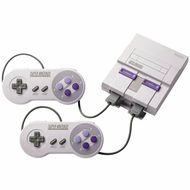 Super Nintendo Entertainment System Classic Edition, titled Nintendo Classic Mini: Super Nintendo Entertainment System in Europe and Oceania and Nintendo Classic Mini: Super Famicom in Japan, was a miniature video game system by Nintendo. It is a follow-up to the NES Classic Edition, and was sold for a limited time between September 2017 and 2018.

It contained twenty-one built-in games, and was designed to resemble the Super Nintendo Entertainment System in North America, Europe and Oceania, and the Super Famicom in Japan. It contained a proprietary menu and emulator to run the games, as it was powered by an Allwinner R16 chip with a 1.2 gigahertz CPU, rather than the Ricoh 5A22 chip with a 3.58 megahertz CPU that powered the system it was designed to resemble.

The system released in Europe and Oceania resembled the Super Famicom, as did the original release. Whereas the North American system used the grey and purple color scheme of the original release in that region. The name and packaging were also different, but the games and the system software itself are identical. Both versions came with the same 30 built-in games and contained two controllers that were modeled after the original game pad. The controllers had a five foot cord that connected to the system via two Wii Classic controller ports that were positioned behind the faux-controller panel in the front of the unit. The power was provided by a standard mini USB plug and wall adapter, and the video was output through HDMI.

The Japanese release on the other hand, also contained twenty-one games, but some of them were different from the Western release. Unlike the Famicom Mini, the Super Famicom Mini used the Wii classic controller ports, in the same manner as the Western releases. It also utilized a standard mini USB plug and wall adapter for power, and the video was output through HDMI.

The following table lists the games included in the SNES Classic Edition and the Super Famicom Mini.