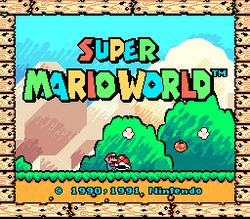 An Italian plumber named Mario, and optionally his brother Luigi, travel to Dinosaur Land to rescue Princess Toadstool from Bowser, King of the Koopa. They also have to rescue the dinosaurs known as Yoshis, who have been trapped inside eggs.

After Mario frees a Yoshi, he can ride on its back. Yoshis can eat most enemies and can run on some surfaces that Mario and Luigi can not. Together, they travel across seven worlds, defeating Bowser's children, the Koopalings, at the end of each world. Then they can confront Bowser in the last world.

Finally, upon defeating Bowser at the castle in the eighth world, Mario finally rescued Princess Toadstool. All of the Yoshis were rescued from their eggs, Bowser and his Koopalings were forced out of all of the worlds, and peace was restored to Dinosaur Land.

As part of Nintendo's flagship series, Super Mario World has been released on many different systems, both through traditional game ports and through emulation.

It was released to arcades on the Nintendo Super System system in 1991. This system allowed play of up to three SNES-based games before the system's timer ran out.

Super Mario World was also included as one of the 30 games in the Super Nintendo Entertainment System Classic Edition and Super Famicom Mini miniature video game consoles, which were both released in 2017.