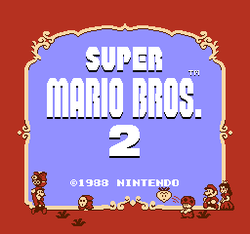 Mario and his friends were summoned during their sleep to help in Subcon, the kingdom of dreams. The evil Wart and his minions took over the kingdom and captured the Subcons, the fairy-like creatures that inhabit the dream world.

Unfortunately, it wasn't easy as Wart was impervious to physical damage. However, he was able to be hurt if he ingested vegetables. Luckily the Subcon Dream Machine, of which Wart took control, alternated between creating monsters and creating vegetables.

Ingesting four vegetables defeated Wart, freeing the Subcons from the vase in which they were imprisoned, thus finally making Subcon free from the terror of Wart and his cronies.

However, the original Doki Doki Panic contained characters from "Dream Factory '87. The story revolves around a storybook. Twins Poki and Piki were fighting over the last page of the book, and the evil Mamu pulled them into the book. Their family has to venture into the storybook themselves to save them. The brother, Imajin, was average in all areas. Mama could jump high and float for a bit. Lina, Imajin's girlfriend, could hover, but she lacked speed and strength. Papa was the strongest and fastest, but he couldn't jump very high.

Super Mario 2 has been released on many different systems, both through traditional game ports and through emulation. It was released to arcades on the PlayChoice-10 system in 1988. This system allowed play of up to ten NES-based games before the system's timer ran out.

Super Mario Bros. 2 was also included as one of the 30 games in the NES Classic Edition miniature video game console, that emulated NES games and resembled a miniature NES, in 2016.