Super Mario 64 was first released for the Nintendo 64 by Nintendo in 1996.

It was part of Nintendo's flagship series, the Super Mario series. As such, it was brought to most of Nintendo's subsequent systems, either as ports or through emulation. 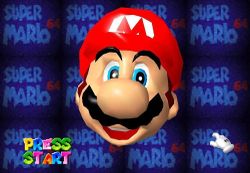 An Italian plumber named Mario is invited to the Mushroom Kingdom castle by Princess Peach, as she had baked a cake for him.

However, upon arriving, Mario discovered that Bowser, King of the Koopa, had kidnapped the princess again.

Peach was brought into an enchanted room at the top of the castle, and the only way that Mario can reach it is by entering magical portraits in the castle and collecting enough stars to break the enchantment keeping Mario from reaching Bowser.

It was re-released through emulation on the Virtual Console service for Wii in 2006 and for the Wii U in 2015.

An enhanced port titled Super Mario 64 DS was released for the Nintendo DS in 2004. This version included Luigi, Wario, and Yoshi as playable characters, improved graphics, slightly altered courses, touchscreen minigames, a multiplayer mode, and the total number of stars was increased to 150.

Super Mario 64 DS was re-released through emulation on the Virtual Console service for Wii U in 2016.