Steven Universe is a character that is part of an American multimedia series consisting of television shows, video games, a film, music, and comic books. 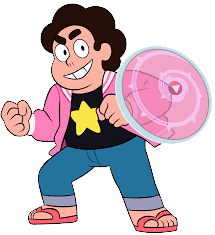 Steven Universe is one of a kind. He's half-human and half-gem, an alien race made of light.

His father is Greg Universe, who was formerly a musician with the stage name of Mr. Universe. His mother was Rose Quartz, who gave up her life to give birth to her son as two beings can not exist with the same gemstone.

Rose Quartz led a rebellion against the gem homeworld, who destroyed organic life on planets to create more gems, and sought to do the same to Earth. The rebels call themselves the Crystal Gems. In the ensuing gem war, which lasted for thousands of years, only four Crystal Gems remained, Garnet, Pearl, Amythyst, and Rose Quartz. After Steven reached the age of 13, he took his mother's place as a member of the Crystal Gems, alongside the new or rediscovered Crystal Gem members, Bismuth, Lapis, Peridot, and Steven's love interest Connie Maheswaran.