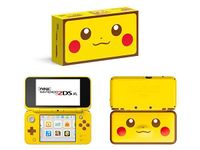 Digital New Nintendo 3DS games, that are not compatible with the Nintendo 3DS, owned by the WEC museum