Duck Hunt is a light gun target game by Nintendo. It was released for Nintendo Entertainment System in Japan in 1984, in North America in 1985, and in Europe in 1987. 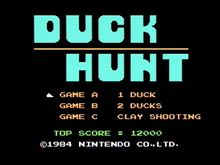 A hunter goes target shooting, in one of three different modes.

In the first mode, one duck will appear in front of the hunter at a time.

In the second mode two ducks will appear in front of the hunter at a time.

A dog will run off into the brush. If the hunter shoots down a duck, the dog will retrieve it.

However, if a duck isn't shot down, the dog will laugh at the hunter.

In the third mode, the hunter shoots clay targets, and the dog isn't involved.

Duck Hunt has been brought to many different systems, both through traditional game ports and through emulation.

It received a slightly updated version on the VS. System in arcades titled VS. Duck Hunt, which was released in Japan in 1984 and in North America in 1985.

The original Nintendo Entertainment System versions was also adapted for arcades on the PlayChoice-10 system in 1985. This system allowed play of up to ten NES-based games before the system's timer ran out.

The game was then released as an emulated version of the NES version of Duck Hunt on the Wii U Virtual Console in 2014.