Cranky Kong is character by Nintendo. He is part of a multimedia franchise consisting of video games, television shows, and music.

The character of Cranky Kong was created by the Rare team of Gregg Mayles and Tim Stamper as the aged version of the original Donkey Kong. 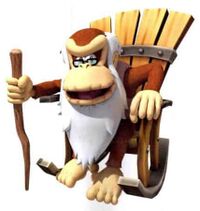 In his youth as Donkey Kong, he was Mario's pet gorilla.

However, after he captured Mario's girlfriend Pauline, Mario caught him and imprisoned him. His son, Donkey Kong Jr. rescued him.

By the time of Donkey Kong Country, he had taken the name Cranky Kong and relinquished the Donkey Kong name.