Balloon Fight is a single screen action game by Nintendo. It is the home version of VS. Balloon Fight, the game that used the VS. System for use in arcades. It was released for the Family Computer on January 22, 1985, and for the Nintendo Entertainment System in North America on June 1986. It was one of the thirty games included with the NES Classic Edition and the Famicom Mini, which was released on November 10, 2016. 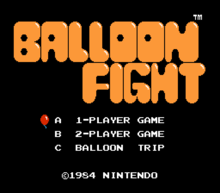 A nameless balloon fighter has two balloons attached to a helmet, and variates the flying height in order to drop down on opponents to pop their balloons.

The goal of the game is for the balloon fighters to pop all of the balloons of the enemies, while keeping their own balloons afloat.

There is also an additional mode called Balloon Trip, in which the goal is to avoid lightning while collecting balloons, aiming to get the high score.

Balloon Fight was simultaneously developed for use in arcades using the Nintendo VS. System, as well as for the Family Computer, the Japanese version of the Nintendo Entertainment System. Because both systems share the same processor, the code for the Famicom version was shared with the team making the arcade version. The VS. System version did have a few differences from the Famicom version, due to the fact that it had slightly more capable hardware.

The Famicom and Nintendo Entertainment System version had three modes, A was the single-player mode, B was the two-player mode, and C was the aforementioned Balloon Trip mode. When Hudson Soft ported the game to the computers that were popular in Japan at the time, the NEC PC-8800 series and Sharp X1, they retained all three modes. The Nintendo Entertainment System version, with the three game modes, was released to arcades in 1985 using the PlayChoice-10 system. This system allowed gamers to choose between ten Nintendo Entertainment System games. To allow the games to be played in an arcade, a separate CPU was used to control the game select, give hints for the game, and display a timer. The timer would end the game session, but the gamer was allowed to play as many games as they wanted until time ran out.