The Macintosh was the fifth line of computers released by Apple Computer. This line was referred to as the Compact Macintosh, as each computer included the display integrated into the case. 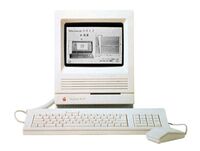 The Macintosh name was shortened to Mac in 1998. Apple continues to sell computers under the Mac line.